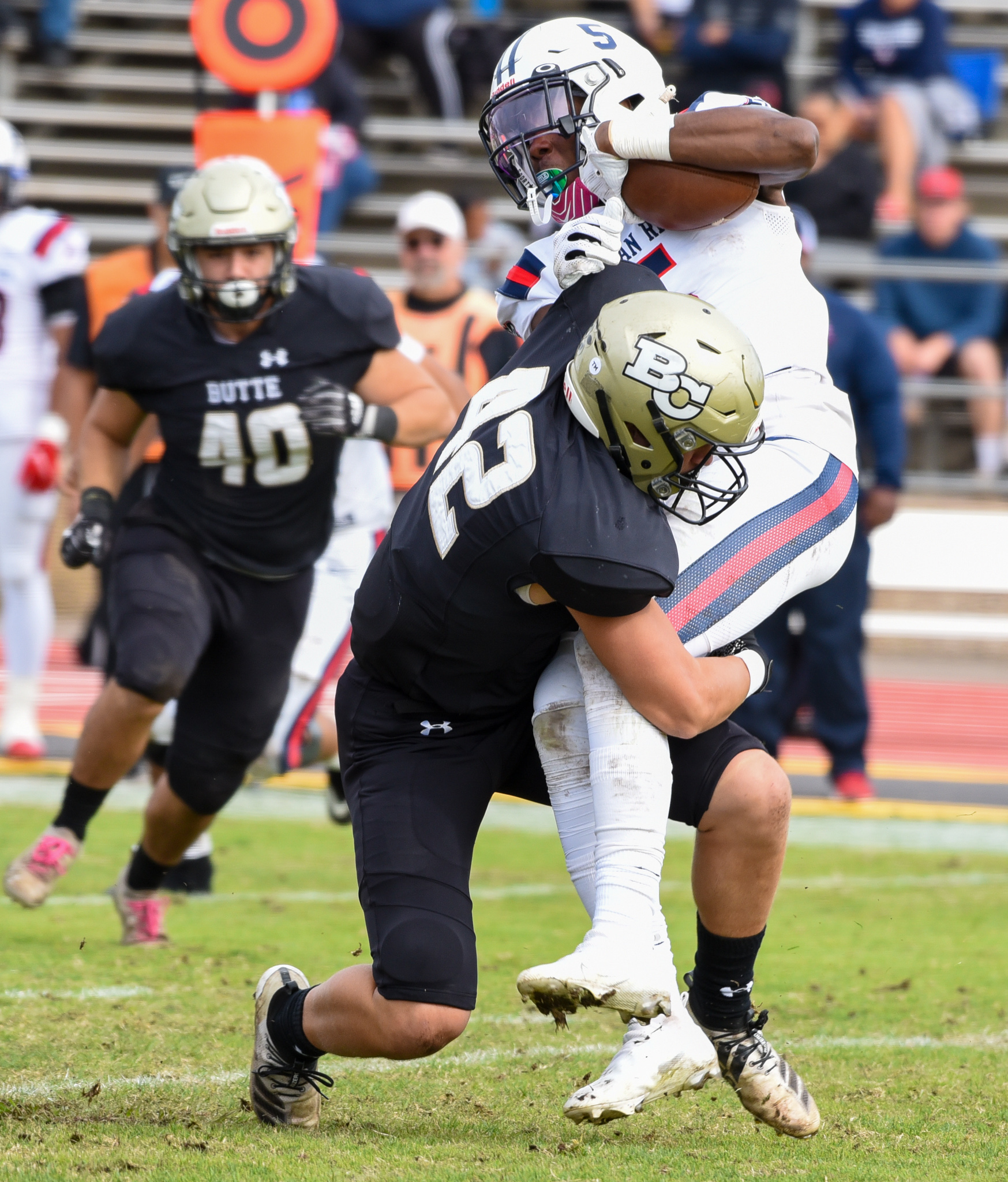 BUTTE VALLEY — All season long Butte football coach Robby Snelling has emphasized the difference in wins and losses has been penalties and all 11 men on the field not doing their job at once.

The only first-half points the Butte defense allowed came on a field goal following an offsides call, and the two touchdowns it allowed came on a blocked field goal that was returned for a touchdown and a rushing touchdown with two and half minutes left in the fourth quarter. On the final play of the game, Butte’s offense was preparing for one final chance to tie the game at 17 after its defense stopped ARC on three straight plays, but the Roadrunners had 12 men on the field on the punt and were penalized resulting in a Cougars’ first down.

Snelling’s message to his team was no different following Saturday’s 17-10 home loss to American River College. Snelling told his team, “We have no one to blame but ourselves. We did this to ourselves.”

With 2:54 left in the first quarter, American River kicker Zach Schreiner lined up for a 39-yard field goal into the wind. The kick was short, but the Butte defense jumped offsides. Schreiner moved up five yards and split the uprights on a 34-yard field goal.

Snelling said the turning point in Saturday’s loss was a blocked 29-yard field goal attempt that was returned 75 yards by ARC’s Isaiah Bass for a touchdown. With 45 seconds left in the game and Butte trailing by seven, ARC punted the ball, but the Roadrunners were called for 12 men on the field — a first down for the Cougars.

“We have to get better and we can’t beat ourselves,” Snelling said.

In the second quarter, Butte’s offense drove 75 yards but was stopped at the 12-yard line. Roadrunners’ kicker Gabe Estabrook kicked a 29-yard field goal to tie the game up at 3-3 at halftime.

The Cougars’ offense scored their first touchdown of the game with 2:28 left in the fourth quarter on a 3-yard rushing touchdown by quarterback Grant Patterson. ARC lined up 1st and goal on the six-yard line, and Butte’s defense stopped the Cougars on two straight plays before Patterson faked a handoff and dove into the end zone for a score from four yards out.

“I thought our defense played great. Outside of jumping offsides on a field goal and giving up three points in the first half, I thought we did a great job slowing the run game down like we talked about,” Snelling said. “For the most part, we gave up seven points on defense today, 10 with the field goal.”

Enrique Correa led Butte’s defense with eight tackles, one for a loss, and Ticker St. Andre had seven tackles. Lathun Snipes and Ronald Nieto had one sack each.

Butte opened the second half with the ball, and ran 19 plays while using 11 and a half minutes to take its first lead of the game at 10-3. Following a pass on fourth down from quarterback Brian Harper to Austin York, Butte running back Johnny Williams ran in for a score from six yards out.

“He’s always a guy we know we can go to in situations like that and he came up big when we needed him to,” Harper said about the chemistry between he and York.

Williams finished the game with 20 rushing attempts for 117 yards and a score, averaging 5.8 yards per carry.

On ARC’s first drive of the fourth quarter, Butte lineman pressured Patterson who threw a pass that was intercepted by defensive back Joseph Sapp. Butte drove the ball to the 17-yard line, before the field goal was blocked and returned for a touchdown tying the game at 10-10.

Butte’s offense punted on its next possession and that is when ARC’s offense scored its lone touchdown.

Harper and the offense got one final chance with just over two minutes to play. It got the ball to the ARC 35 yard line, but the quarterback fumbled on a scramble.

“Some of it was plays, some of it was design, just trying to make plays when I could but it wasn’t enough,” Harper said about the quarterback runs.

Snelling said he talked to his team at halftime about finishing, and he felt the team moved the ball better in the second half but could not finish on the final drive. He said when the field goal was blocked it changed the game.

Butte (4-4, 2-1 NorCal Conference) now prepares for its road matchup against College of the Sequoias at 1 p.m. Saturday in Weed.

Prior to the game, Butte held a moment of silence and retired the jersey No. 44 in honor of former fullback Tyler McIntyre alongside Tyler’s parents, his wife Keara and their baby Hollie. McIntyre played with Corning High School and then the Roadrunners in 2011-2012, before playing at Bryant University. A gofundme account has been set up and can be found by visiting https://bit.ly/2Zzhvj9.

Roadrunners honoring former @CUHSCardinals, @ButteFootball and Bryant College fullback Tyler “T-Mac” McIntyre, who recently passed away, prior to today’s game with a moment of silence and retiring of the No. 44. pic.twitter.com/mv6WOp84Lu