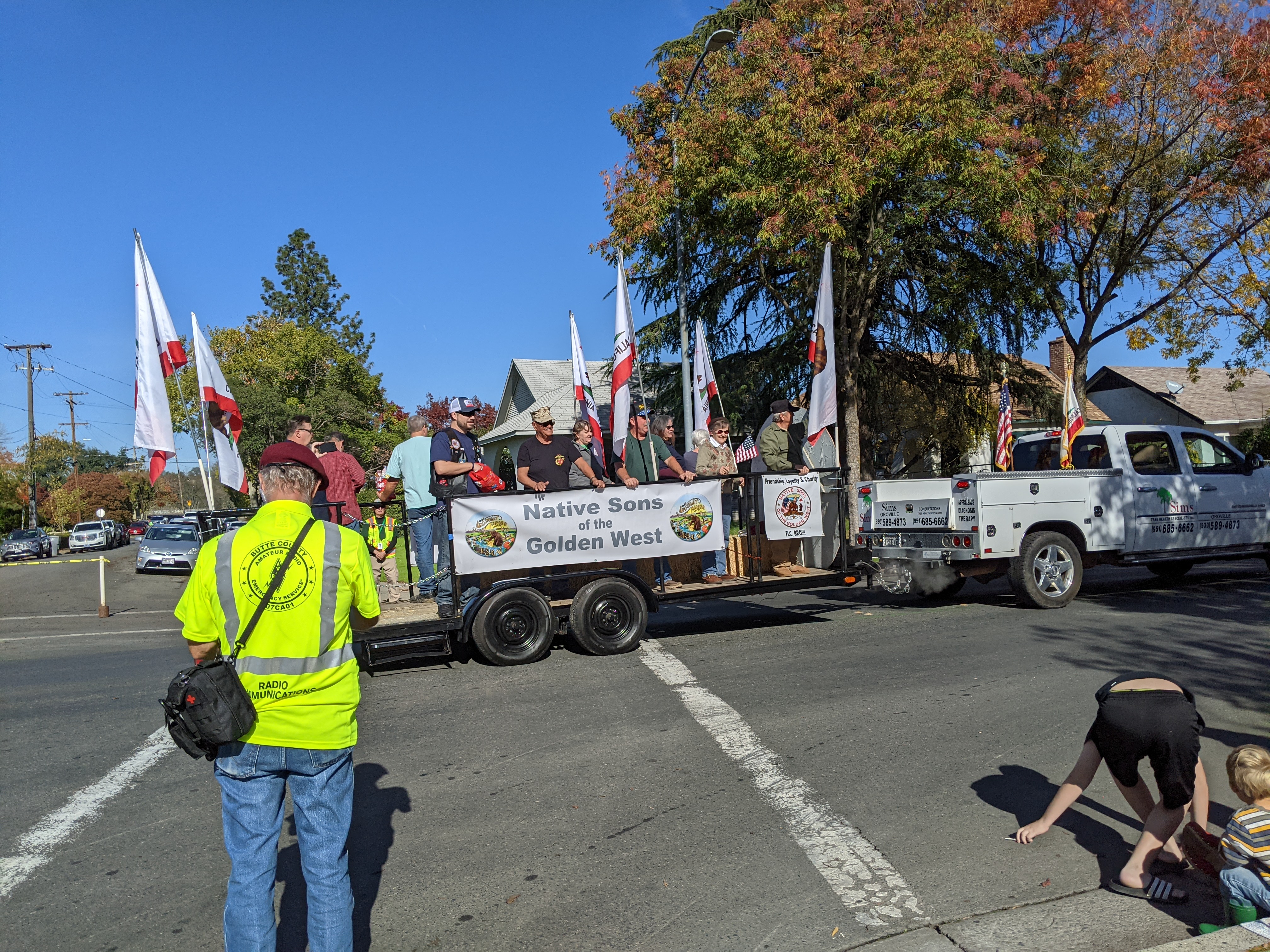 Before the race began, Cameron Litvinchuk sat in his small military jeep golf truck in uniform. His grandfather, Michael Litvinchuk, who rode in front of him in the parade, built a tank out of a lawnmower. Michael has been participating in parades for seven years and has ridden in parades in Gridley, Chico and Marysville.

Cameron was pleased with the parade turnout. He said there have been fewer people attending in the past.

Veteran Richard Warmack rode in a big jeep as parade Grand Marshal with his wife, Jane Warmack. Richard served in the Marine Corps for three years starting in 1943.

“I’m happy to be here,” he said. “We need to keep our country strong. I’m concerned about our safety. We take it for granted.”

Warmack believes the country should keep on keepin’ on.

“I believe we should be strong,” he said. “We need to keep American citizens safe. We don’t want foreigners on our land.”

Richard Warmack was born and raised in Oroville.

“Oroville is my town,” he said. Warmack fought in six battles, including the battle of Iwo Jima.

Heather and Kraig Morgan and their son Finn Morgan who have lived in Oroville for 10 years. came out to watch the parade. Both Heather and Kraig have family members who are serving or have served in the military.

“We wanted to show our support for veterans,” Heather Morgan said. “It’s important to show up to community events so they keep putting them on.”

Heather said there is a deep sense of history with the parade and Veterans Day.

“So many things were overcome to get here,” she said.

Kraig took a minute to remember those that have died in the line of duty.

“We need to remember the ones that have fallen,” he said.

“Today will spark conversations and we’ll learn new things,” she said. “It’s important to let veterans know they haven’t been forgotten and are appreciated.”

Bangor resident Ed Cox volunteered for the parade and helped direct traffic and made sure cars took a detour past the parade. He wore a bright green vest over his military t-shirt.

“This reminds me of what our country used to be and should still be,” Cox said. “America stands for honesty and integrity. This parade helps bring that out.”

Cox is a disabled veteran. He served in the Army for 15 years. He is also a member of the American Legion.

“I’m proud of what our country stands for,” Cox said. “God bless our world. We need it. ”