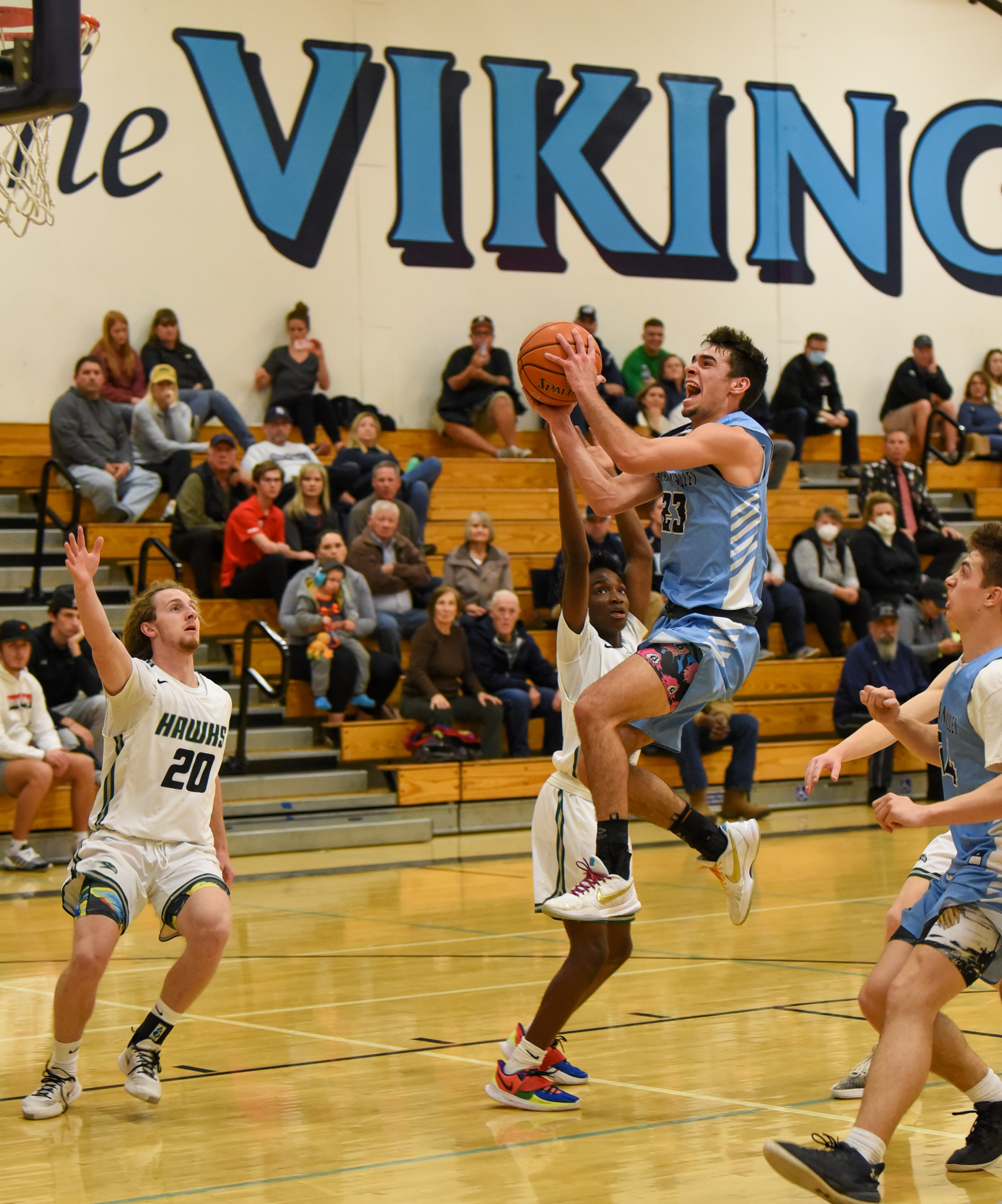 CHICO — Most of the boys on the Pleasant Valley boys basketball team have been playing together since sixth grade and the chemistry of the Vikings was evident in Friday night’s home win.

In the opening possession for the Vikings on Friday, Ned Joyce connected with Noah Thomas for an alley-oop. Thomas’ dunk on the alley-oop was one of two dunks on the night for the senior. On the next possession Thomas connected on a 3-pointer.

Thomas was one of several double-digit scorers for PV as the Vikings defeated Liberty Ranch of Galt in the second round of the McDonald’s Winter Classic — the boys basketball team’s home tournament.

PV (6-1) defeated Liberty Ranch 77-33 after opening the round-robin tournament with a 71-29 win over Stagg on Thursday night.

Joyce said players came together their sophomore year and decided they needed to all buy in together, and it is showing.

The Vikings trailed 8-5 2 minutes and 30 seconds into the first quarter Friday. PV’s defense executed a full court press against Liberty Ranch from the start and on several occasions got caught with the Liberty Ranch scorers undefended under the basket.

“Those first couple minutes yesterday we got into that press and it was like all of us were on one page. We’d call something and we’d all call it back,” Joyce said. “We all say something on defense we all call it back so it’s just kind of like we’re all on the same page because we’ve been playing together for so long.”

“We’re working on some new things defensively that we put in this week and we’re going to make some mistakes,” said Pleasant Valley coach Tim Keating. “They’re so ultra aggressive and I can’t teach that except at practice. We have kids that are willing to work their butt off for that deflection and do it for the sake of their teammates and not themselves, so that’s the culture we try and preach.”

In the second quarter PV’s defense locked in. PV allowed 17 points in the first quarter and led 26-17 at the end of the first quarter. The 17 points allowed would be more than the Vikings would allow for the remainder of the game.

“I think first quarter we got that first dunk, I lobbed it to Noah and in the second quarter we all kind of looked at each other and said we need to lock in, we need to defend we need to rebound we need to go on our offensive threats and it really picked up,” Joyce said.

PV held Liberty Ranch scoreless for the first 5 minutes and 39 seconds of the third quarter. The Hawks had a chance to score on a reverse layup midway through the third quarter, but PV’s 6-foot-5 forward Chase Mitchell blocked the shot. With 2:21 left in the third quarter LR’s Mahkai Longoria hit two 3-pointers and the Hawks made one free throw.

Two Vikings saw their first playing time on the varsity team. Junior Caleb Weintraub entered the game and immediately got a rebound. Weintraub was fouled on a 3-point attempt and made all three free throws for his first points. Junior Jackson Backus also saw playing time for the first time. With under two minutes to play Backus took a shot from beyond the 3-point line and made it, bringing the Vikings’ student section as well as the team’s bench to its feet.

Keating said PV has had more games than practices at this point in the season. Keating said ahead of Eastern Athletic League play, which begins Jan. 6, his team will continue to work on execution and detail as football players return and continue to learn offensive sets.

“Defensively our rotations they haven’t had enough practice,” Keating said. “We’re just working, making adjustments. We talk about being a sponge learning the game. Tomorrow will be different, tomorrow’s going to be a very good team.”

Pleasant Valley will now prepare for its matchup with Vacaville (5-2) at noon Saturday in the McDonald’s Winter Classic.

On Saturday, the final day of the tournament, University Prep will play Liberty at 10:30 a.m., PV and Vacaville will play at noon and Yreka and Stagg will close out the tournament at 1:30 p.m.